It seems it’s Snapchat’s turn to copy Instagram, with a new feature that brings animated GIF stickers to Stories.

A few weeks ago, Instagram announced a partnership with GIPHY that brought animated GIF stickers to Stories. The feature has now also appeared on Snapchat, following a similar partnership deal with GIPHY. As of Tuesday this week, Snapchat users will be able to use almost an unlimited amount of animated GIF stickers in their Stories, courtesy of the biggest GIF library on the Internet.

A few weeks ago, Instagram announced a partnership with GIPHY that brought animated GIF stickers to Stories. The feature has now also appeared on Snapchat.

The new animated stickers can be found in Snapchat‘s Sticker Picker by tapping the sticker icon, and searching the GIPHY library. Users can of course also use any of the original Snapchat stickers if they want. The stickers from GIPHY retain all the same characteristics as Snapchat’s own – i.e. the ability to add more than one, scale, or delete stickers.

The animated stickers can also be pinned to objects in videos by pressing and holding while adding one to a video. 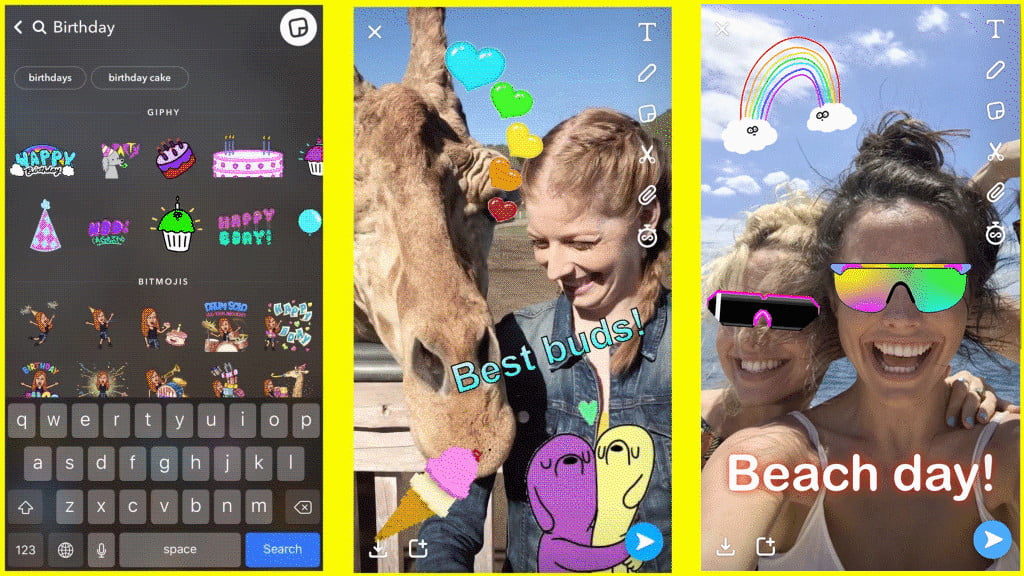 Together with the new GIF stickers, Snapchat is also bringing a change to its UI that should make at least some of its users rejoice. Within the next few weeks, the platform will introduce tabs in Snapchat Friends and Discover.

The tabs will appear on iOS first, and then on Android later on. The change should help users find and follow the Stories they really want to. In the Friends area, users can see who is active and who is not within group chats. Also, a Subscription tab will separate public Stories from followed accounts and suggested accounts.

Together with its new GIF stickers, Snapchat is also bringing a change to its UI that should make at least some of its users rejoice: Tabs in Friends and Discover.

While the new animated GIF stickers feature will bring more creativity for users on Stories, the new tabs will make it easier for users to find the Stories they want.