Not the meme you’ve seen as you scroll through your Twitter, Reddit, or Tumblr feed? Well, we can’t give it all away right from the start! But we can help you understand why ‘Shaggy’ has been a rising star in the meme world as of late.

If you didn’t know the back story, you MIGHT actually think this came out of thin air, you aren’t alone. But Know Your Meme knows better than to leave us all in the dark!

So what is Shaggy’s Origin

Apart from being introduced to the world as the snack-loving, ‘zoinks’ spouting best friend of the infamous Scooby Doo and one of The Mystery Machine’s most oblivious detectives, Shaggy is quite the popular character to poke fun at – as shown in both the show from its start in 1969 and most recently on the internet.

But this trend isn’t necessarily ‘new’. It has been a long time coming and, let’s be honest, like all memes, this too will eventually morph into a newer, funnier version of itself. But according to Know Your Meme, the first Shaggy meme hit the internet in 2015 with the Shaggy This Isn’t Weed Fred Jones meme courtesy of Reddit user thiscontradiction. 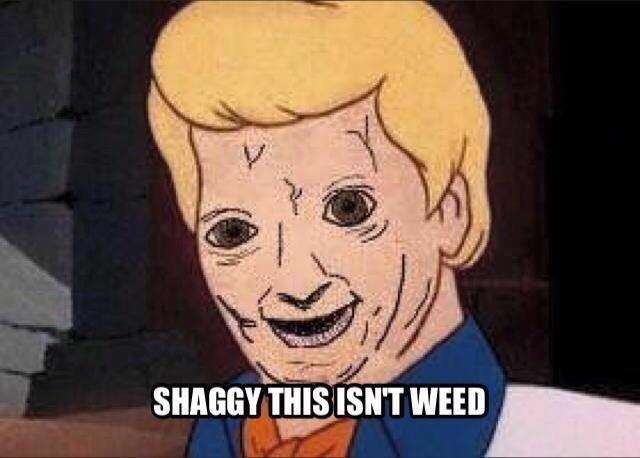 Okay, to some that might not be funny. Fair enough. To the meme community, this was GOLD and while ‘Shaggy’ didn’t resurface until two years later in the meme world, the above was just the beginning to January’s 2019 resurgence. Hold that thought, we’ll get back to that momentarily.

But first, enter an earlier, yet seemingly similar version of today’s trend, the 2017 Ultra Instinct Shaggy.

The above was the result of inspiration courtesy of Japanese Manga series, Dragon Ball whose character Goku transforms into what is called ‘Ultra Instinct’ by focusing on the battle at hand with a clear mind – a sort of defensive mode if you will, portrayed by his altered attitude, appearance (white hair) and a glow that surrounds him.

And while Shaggy doesn’t transform to the extent of our friend Goku – donning a darker look, Shaggy is totes rockin’ the badass look. Which is fitting giving the 2011 Scooby-Doo! Legend of the Phantosaur movie scene that spawned this series of memes flagged by Youtuber NukezNitro who was the first to pinpoint Shaggy’s Ultra Instinct transition courtesy of a post-visit with a hypnotherapist.

Which brings us to…

According to Know Your Meme, Shaggy resurfaced AGAIN in late 2018 and continues to spark today’s phenomenon as mentioned above – hinting at a new Shaggy… an omnipotent Shaggy. Crazy right?!

Not really given the context of the Ultra Instinct one from 2017. The latest memes surround everything from ‘only using x% of his power‘ to poking fun at infamous superheroes, including his modern interpretation via actor Matthew Lillard and my personal fave and one of the most popular below: