Fun Pop Mashup Of The Week #56

Merry Christmas everyone! I hope you are having the bestest, merriest, most wonderful time of the year! Hope the Bucks Fizz’s been flowing, the presents were just what you asked for, and the festive feast hasn’t given you triplet food babies (yet). I say this because it is, of course, time for our festive course of mash.

Also Read: Here Are The Most Epic 360 Degree Videos On Facebook In 2015

Now, this week nothing came quite as close to Christmas as Star Wars. The franchise, bought by Disney for a measly 4 billion dollars, has seen its newest instalment released with a marketing fanfare to rival Coca Cola’s “Holidays are Coming”. Which means everyone has been talking about it, shouting about it, crying about it. And taking to Twitter about it.

Someone has gone and created a parody account for the new villain, Kylo Ren. Setup on Monday, it’s already amassed over 170,000 followers and counting. Now, be warned, if you haven’t seen the film, this MAY contain some spoilers for you, but it is nonetheless an excellent pastime! It’s all about imagining Adam Driver (the actor playing Kylo) as an angry, emo youngster. Here are some gems:

*force-opens the door for you when you're too far away so you have to run for it*
you're WELCOME!

Having an account on Facebook and a few friends on it for good measure, means you will have looked for (and hopefully found) a Panda amongst some snowmen this week. Not a euphemism, but a puzzle created by Hungarian artist, Gergely Dudás. The Facebook post has had over 94,000 likes and over 168,000 shares.

And if you solved that one, Gergely has a new one for you involving some owls and a pussycat –

Also on Facebook, and on the subject of Star Wars –

It wouldn’t be a proper Christmas without:
1. Instagram
2. Cats

If you have a cat, you are well accustomed to your feline friend taking more than a passing interest in your festive tree! If you do not own a feline, you will have definitely seen photos from feline-owning friends of said felines in some sort of interaction with said trees.

Now some of these feisty felines are not just content with pawing at tinsel and clawing the presents, some will climb up the tree and hide amongst the branches. Here are some great examples of this wild, festive behaviour:

As we all know, Vine is the perfect small dose of merriment we enjoy all year round so it comes as no surprise to find a compilation of the best Vines of 2015. It includes puppies, Santa, songs, cats taking down toddlers in the snow…you know, all the good stuff!

It’s official, Sainsbury’s won Christmas in the UK on YouTube, with its ‘Mog’s Christmas Calamity’ ad

Watched almost 27 million times, it’s stolen John Lewis’ crown from last year when ‘Monty the Penguin’ was watched 26.5 million times. If you think that’s impressive however, this ad from German supermarket Edeka has had over 44 million!

So Snapchat was being all Secret Santa this week when it released seven new trophies on Tuesday. Five of the seven new Snapchat trophies are as follows:

The last two are still a mystery. Scouring Twitter and Instagram for users desperately trying to unlock them might give you a few clues on how to access those mysterious final two. It would not be surprising for Snapchat to offer more trophies, geofilters, games and in app purchases during the Christmas break. It’s the busiest time of the year for apps with merriment all around, and plenty of food to digest, it’s prime time for phone games. 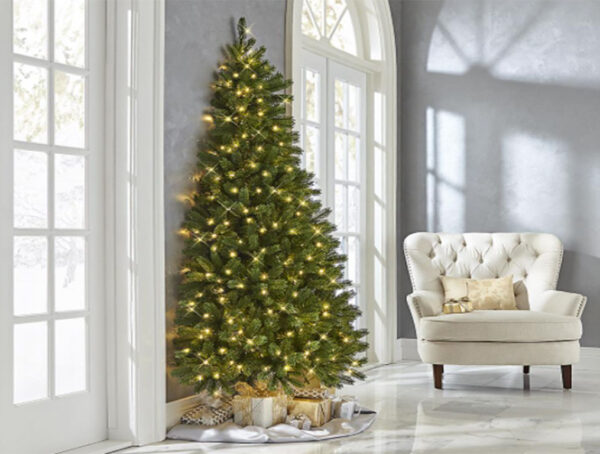 Shop
Save Space With The Against The Wall Christmas Tree