You Can Now Translate Posts Into Any Language On Facebook

Whether you’re a global brand or small business talking to different markets, language has always been an issue on social media: do you post in English, in your local language, or both? Facebook has tried to bring solutions in the past: organic location targeting, Global Pages, etc… but here is the thing, you still needed to actually speak the language!

And that is what makes this new feature even more awesome: it lets you translate anything you write, into any language you want, and then post it on Facebook, targeting the specific language to the right users, all automatically! AMAZING!

Facebook can now automatically translate your updates into any language!

It all starts on your Page. Simply write your status update as you normally would, and then click on “Write post in another language.” The magic starts here: automatic translation in any language; and you can translate your update in as many languages as you want too. 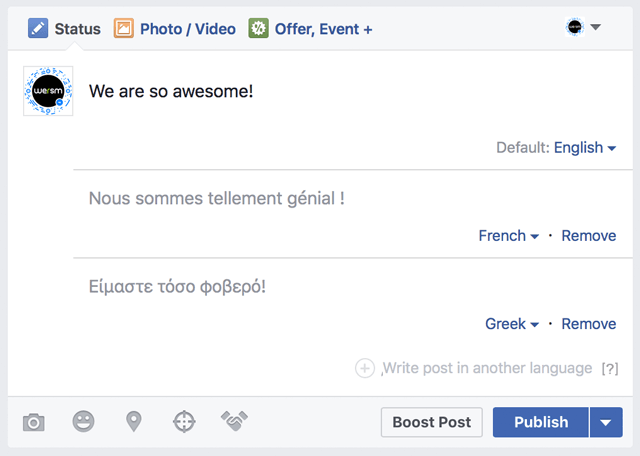 Of course, the translation isn’t going to be always perfect, but hey, that’s already huge right? In the above example, the translation fails to understand the plural when translating “awesome” hence the “génial” instead of “géniaux” in French and the “φοβερό” instead of “φοβεροί” in Greek. However, if the automatic translation doesn’t work, you can just change that by editing the post! No problem!

Machine Learning At The Heart Of Translation

Facebook has built its new translation tool to be able to learn from its mistakes. The mistakes I reported will be corrected over time, thanks to input from users on both sides of the translation – i.e. when a French user wants to translate “Nous sommes tellement géniaux” into English, Facebook will understand this relates to “We are so awesome” in English and learn from its previous wrong translations. Machine learning at its best!

The new Facebook automatic translation feature has machine learning built at its heart.

You can publish your post in as many languages as you want, Facebook will only show one to each user. The platform will select the most appropriate version based on different criteria like the language a user is using Facebook but also their Location, or the language they typically write posts in. For example, someone who lives in the UK but mostly shares updates in Greek, would be served the Greek version of the above post, even if he uses Facebook in English. The whole thing is highly responsive, and it understands each user’s situation and habits.

This is an amazing new feature for Facebook, opening a world of opportunities for any business, of any size. Imagine a world where you can literally talk to anyone within your community, no matter if you are actually capable of speaking their language or not. I am astonished. Félicitations Facebook!