ROAR For Life – Because Social Media Can Save Lives

In Russia and Eastern Europe in general, people don’t like social media campaigns. They are surrounded by a popular culture where brand messages have very little space to be heard.

In Russia and Eastern Europe, people do not like social media campaigns.

They’re also places where the youth love to party, drink and… drive. In Russia alone, 25% of car accidents happen because of drink-driving. And MARTINI, despite being a long time promoter of the “Don’t drink and drive” message, is finding it difficult to reach out to younger generations…

Until the brand decided it was time to revolutionise the social media landscape in Russia, and launch the first social campaign that actually mattered to people. ROAR for life was born.

When social media isn’t sexy enough on its own, the best answer is always to bring in celebrities. This is exactly what MARTINI did, bringing in famous pilots from the Williams Martini Racing team and popular celebrities into the mix. Celebrities came from Russia, Poland, Ukraine and Kazakhstan.

ROAR for life was simple in concept, yet very powerful as a message: all across the targeted countries, people were invited to record videos of them imitating the sound of a Formula 1 race car, and then share it on the campaign’s website and on their social profiles using the #roarforlife hashtag. Finally they’s have to nominate their friends to do the same. 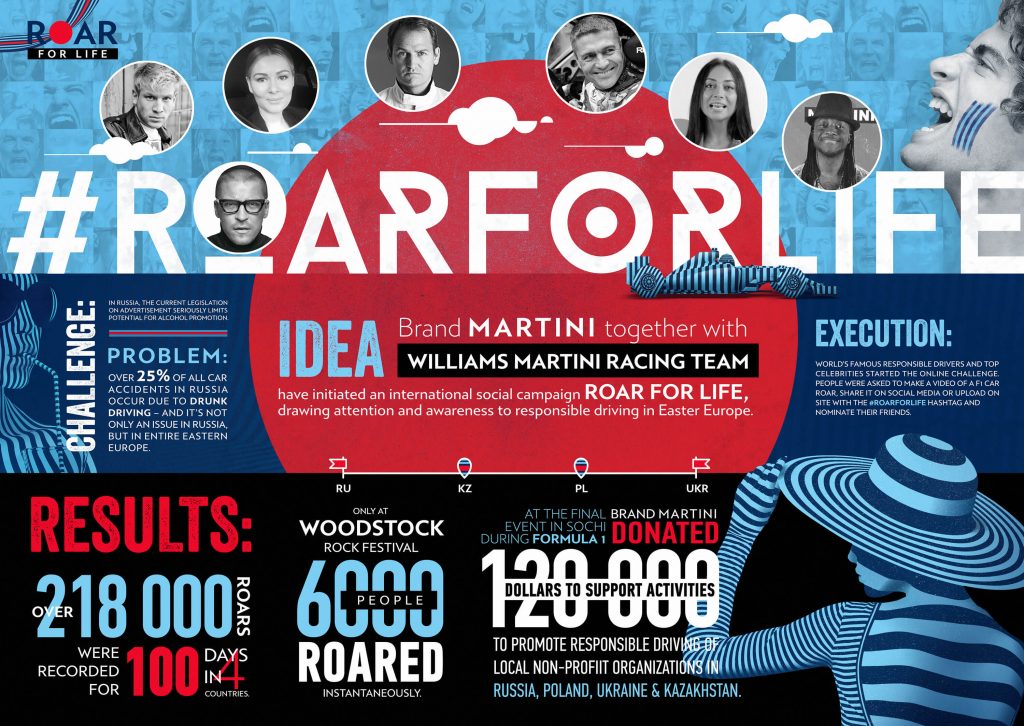 Because sometimes, all it takes for a message and a campaign to be successful, is a shout-out (or a ROAR) on a subject that concerns us all.

All it takes for a campaign to be successful, is a shout-out on a subject that concerns us all.

ROAR for Life is a campaign realised by RCG Russia for MARTINI.